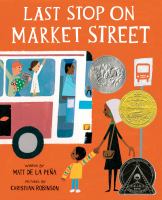 I wanted to like this book, but I didn't. The characters are complete stereotypes: the blind man has a seeing eye dog and talks about his other senses being heightened, the teenagers are too into the latest ipod/whatever, some guy in a cowboy hat is strumming a guitar (probably country music, considering the major stereotyping, but we're not told). The old lady is wearing curlers and carrying a jar of butterflies (I guess to signify she's senile like all old ladies should be (sarcasm here)).

Second complaint is the dialogue. It's stilted and weird. The grandma and grandson both talk like "how come we don't gotta car?" and she calls her grandson "boy." While I've known real people who talk this way, in this case it seemed like a lazy stereotype to depict race/poverty/living in the City in the most uncomfortable way possible.

Thirdly, The boy's "character arc" begins as he complains about having to go to the place (we find out at the end of the story it's a soup kitchen where they volunteer) and complain about having to ride the bus there, but then at the end he realizes he's glad he came. But...he says earlier, "How come we always gotta go here" which makes it sound like it's a recurring event every Sunday after church. Why did he suddenly realize on this day that it was fun to come when he's gone to the soup kitchen several times before? Because the story demanded it? There's no logical reason why he'd suddenly change his mind.

There are much better books out there if you want realistic diversity. This one is a definite skip.

This book won the Newberry and I was skeptical, as this award is traditionally given to picture books. However, this FEELS like a chapter book. The reader has a lot to think about the characters, themes, and language. Christian Robinson's illustrations are as powerful as ever!

Take a bus ride through the city to see what, where, who and why our city is great -- diversity.

The story is sweet, simple and beautiful. Living in the Bay Area, I love seeing kids books that show city life and riding the bus. It was easy for my son to connect with the story (he's 2) and I found it heartwarming.

In reading to my preschool aged children, this book really stood out to me. The pictures and words were simple, understandable, and easy to relate to. However, the best thing about the book was the plethora of rich life lesson material it presents. As I read this to my kids, I took the opportunity to expound on the book's themes of beauty and appreciation of diversity (age, skin color, clothing, disability, socioeconomic status, etc.), service, kindness, and optimism.

Newberry Award winning tale of one boy's journey home from church with his grandmother on the bus.

The positive outlook of the grandmother encouraging her grandson to look on the bright side of life...I found this so refreshing! My favorite is when he asks her, "How come it's always so dirty over here?"...and she answers, "Sometimes when you're surrounded by dirt, C.J., you're a better witness for what's beautiful."

This is a sweet story about a boy who is always looking at and wanting what others have. His nana teaches him the importance of finding beauty in everything and everyone around him. Her message is a great one to share with children who are learning how to value the people and things around them.

This book has caused some talk due to the fact that it is a picture book and it won the Newbery. I try and read the winner each year. This is a nice story about a boy and his grandmother. The grandmother sees the beauty in all things. It tells a nice story and the pictures are very good but the text did not really grab me the way a Newbery winner should

A bus ride reveals the beauty and wonder of a vibrant city to a small child on his trip to help out at the soup kitchen with his nana.

This book was very cute and the illustration were nicely done too. Like the NYT, I highly recommend it.

So grateful I was able to nab this as "Lucky Day" title. I’m always on the lookout for good books for my preschooler, with sophisticated storytelling and beautiful art. And most especially, ones that feature people of color. Last Stop has it all! The illustrations of wonderful and the story is well-told, not to juvenile and rich with color. Read a more detailed review on my blog: https://tlovepdx.wordpress.com/2015/07/09/book-review-last-stop-on-market-street/.

Beautiful, Keats-like illustrations make this story come to life. Special attention is paid to city life, and CJ's grandmother is a wise, beauty-finding guide. I love the bus ride sequence in this story; de la Pena is able to bring to life the best of city living through his gentle storytelling voice and these outstanding illustrations. Ideal as a read together for ages 6 and up.

The author, drawing on his own childhood experiences, has us follow CJ, a small boy, and his Nana across town on the bus. Nana helps CJ find beauty and wonder all along the route, especially at the Last Stop on Market Street.

A great book that shows how to find pride and beauty in our surroundings, no matter how poor someone is.