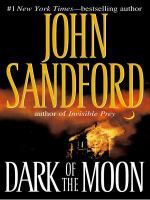 Dark of the Moon

A well paced mystery with plenty of red herrings. A couple of small plot holes and okay characterizations are made up by the narrative. Worth it as an airplane or beach read.

Lots of twists. I enjoy how Sandford has us follow the logic of his main character Virgil Flowers, with Virgil being amazingly transparent with everyone -- on purpose as a strategy. This one I rated a little lower because I thought the hints about who was the killer were too obvious. Good read nevertheless.

Although Virgil Flowers has been introduced in the Davenport series, this is the first in the series dedicated to Flowers on his own. If you enjoyed Flowers as a sidekick, this should be right up your alley. Funnier and quirkier than Davenport, Flowers is still an able investigator. In Dark of the Moon, Flowers is sent to the small town of Bluestem to investigate a double homicide. Like most Sandford books, the bodies start piling up before the end when Flowers discovers that the recent murders may be tied to something in the far past.

Finally got around to reading this Virgil Flowers blockbuster - - I want to be Virgil [and I've always hated fishing]!

My reading secret is that I love John Sanford books, and I'm usually not a genre reader.
My faves are his "prey" series but I liked this book too - the first of his "Virgil Flowers" series.
A multiple murder mystery with twists and turns and interesting characters.

I like all of Sandford's books that I have read, and this was no exception. I always want to get to the next chapter and then the next book ! Flowers is a different type of character to Lucas Davenport, who is his boss and stars in the other Sandford 'Prey" novels. The characters are linked and I like that.

Virgil Flowers — tall, lean, late thirties, three times divorced, hair way too long for a cop's — had kicked around a while before joining the Minnesota Bureau of Criminal Apprehension. First it was the army and the military police, then the police in St. Paul, and finally Lucas Davenport had brought him into the BCA, promising him, "We'll only give you the hard stuff."
He'd been doing the hard stuff for three years now — but never anything like this.
In the small town of Bluestem, where everybody knows everybody, a house way up on a ridge explodes into flames, its owner, a man named Judd, trapped inside. There is a lot of reason to hate him, Flowers discovers. Years ago, Judd had perpetrated a scam that'd driven a lot of local farmers out of business, even to suicide. There are also rumors swirling around: of some very dicey activities with other men's wives; of involvement with some nutcase religious guy; of an out-of-wedlock daughter. In fact, Flowers concludes, you'd probably have to dig around to find a person who didn't despise him.
And that wasn't even the reason Flowers had come to Bluestem. Three weeks before, there'd been another murder — two, in fact — a doctor and his wife, the doctor found propped up in his backyard, both eyes shot out. There hadn't been a murder in Bluestem in years — and now, suddenly, three? Flowers knows two things: This wasn't a coincidence, and this had to be personal.
But just how personal is something even he doesn't realize, and may not find out until too late. Because the next victim... may be himself.

There are no age suitabilities for this title yet.

There are no notices for this title yet.

There are no quotes for this title yet.

Loading...
VIRL owns a similar edition of this title.