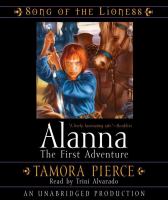 Eleven-year-old Alanna, who aspires to be a knight even though she is a girl, disguises herself as a boy to become a royal page, a learning many hard lessons along her path to high adventure.
Publisher: New York : Random House/Listening Library, p2000
ISBN: 9780739371961
Branch Call Number: CDA YA PIE
Characteristics: 4 sound discs (5 hrs., 9 min.) : digital ; 4 3/4 in
Additional Contributors: Alvarado, Trini

Seems like in a lot of YA books, there’s a lot of gingers. Here, we have twin ginger’s with purple eyes.

This was just ok, the ending was super hokey (and predictable), but it’s only 5 hours long.

Characters: 9/10
Plot: 8/10
Writing: 8/10
Audio: 10/10
This was my first foray into Tamora Pierce's writing, though I have long heard her praises sung by my friends. This was a fun fantasy read. I love Mulan stories (where a girl disguises herself as a guy to be a warrior), so the main plot already had me sucked in. I liked the integration of magic, though Alanna sometimes came across as over-powered.

Despite my serious annoyance at the end, I'm still giving this book a high rating because it was pretty darn entertaining throughout the rest. Maybe it was because an audiobook, but I was able to along with most of the stuff that was doled out to me.

I've read some of the other reviews and I agree that Alanna is a special snowflake and that ending with the white people coming in and saving everyone. Now you would ask, "Why you gotta make a big deal about it?" Because it was significant enough for me to notice. Believe me, I'm like the last person to notice these issues. I don't read too deep into books. I don't try to find answers to life in fictitious stories. But with Pierce, I've noticed a pattern and I don't like it.

Alanna: The First Adventure is one of those novels that everyone tells you about. Apparently, a lot of women read this as middle graders and found it genre-breaking, and satisfying. And for the time it was published (1983) it was.

But the problem is, a ground-breaking idea can't hold a book by itself, when (30 years later) it's up against phenomenal writing of the same concept, by other authors. So if I had read this in the '80s, I probably would have been utterly charmed by the concept alone.

As it is today- being a fan of strong female protagonists, and YA, having read these things for the past 25 years- I just wasn't impressed. Feel free to throw tomatoes and stop reading right now; I fully understand I'm in the minority here.

Here are my issues:

+ The writing is wooden. We get a lot of the tell, not the show, when it comes to Alanna's emotional state.
+ I also think things are understated in terms of how grueling it is to train that level of physicality, let alone all the "she just ignored the pain and went on" scenes. That kind of intense labor is difficult, and I'd believe her strength more if it was developed, instead of "oh, by the way, she sneaked off to train at night". Does the girl never sleep??
+ Also, I feel like most of the characters are underdeveloped. This could be a length thing- this first book spans 3 years, all the tough stuff- but we don't get internal processes, only reactions.
+ The audiobook version is horrible. Truly, one of the worst narrators I've encountered (Trini Alvarado); she was a mumbler, paused at line breaks but not the end of sentences, rushed everything, used the wrong vocal inflection, and butchered her accents.
+ And lastly, Alanna has zero weaknesses, which smacks of a Mary Sue. She's female, which is a big secret, but she's faster, more thoughtful, more magickal, more honest, and all-around better than every other character in the book.

And here are the things that made me cheer:

+ George. I'm a rogues fan, and I think George was (physically, and by reputation) one of the most fleshed-out characters in the book.
+ Also, that Alanna starts in this book at age 10. This feels more Middle Grade in concept than YA, but part of that is because she starts young- which makes her ignorance, optimism, and sudden emotional fits as she enters puberty all the more believable.

I'm going to keep reading the series, because I know I'm supposed to love it. But if it doesn't get much better by the end of Book 2, I'm quitting it.

Love this book and series one of those books that just took me by surprise has romance, sword fight and womanhood one of the only books thatsvtals about becoming a women an awesome highly recommended it

First book I ever read all the way through as my own choice. i must have been 9 and I've reread it many times now. Great book, that's all that can be said, not the hardest to read but very interesting and entertaining left me dreaming for months. :) Great characters too.

This is one of my Favorite books. I never wanted to return it, it was so good!

This book is really good. It's a bit slow at times, but thoroughly enjoyable.

One of my favourite stories ever. what a book! could read it again a 1000 times. Combines a great plot with intriging characters and interesting twists in the storyline. I recommend it to any tweens, and I garante you'll love it

sarahbru17 thinks this title is suitable for 10 years and over

bookbooklover5 thinks this title is suitable for 10 years and over

hur74Vety thinks this title is suitable for All Ages

There are no summaries for this title yet.

There are no notices for this title yet.

There are no quotes for this title yet.

Find it at VIRL