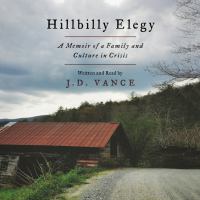 A Memoir of A Family and Culture in Crisis

Shares the story of the author's family and upbringing, describing how they moved from poverty to an upwardly mobile clan that included the author, a Yale Law School graduate, while navigating the demands of middle class life and the collective demons of the past.
Publisher: New York :, HarperCollins,, 2016
Edition: Unabridged
ISBN: 9780062477521
Characteristics: 1 sound file : digital audio file,rda
Additional Contributors: OverDrive, Inc. - Distributor

I lived in Middletown for a few years & thought it was much* worse of a “hillybilly” experience than the book only seems to scratch the surface of. I worked at the golf club Vance worked at and served Ron Selby his beers at the turn (9th hole). The writing style is meh and yes, it is a memoir of someone with something to prove. I’m not sure if it went over quite as planned.

Learn what it REALLY means to be a proud Hillbilly!

HILLBILLY ELEGY is JD Vance's attempt to make sense of his childhood and his people, who are the embodiment of what the rest of the United States disparagingly refers to as Hillbillies, Rednecks, White Trash, Trailer Trash, etc.

JD's life story is fascinating and filled with considerable empathy and gratitude. His journey, and the struggle to overcome his childhood, is something readers will enjoy immensely. This book offers you a rare opportunity to feel like you understand what it is like walk in someone elses shoes and know them. You will sympathize for JD's struggles and celebrate his accomplishments. You will come to really like him, and certainly, admire him.

JD does an excellent job of drawing the reader in and allowing us a deeper understanding of a culture that is deeply and historically rooted in the United States. Because Hillbillies don't trust outsiders (often with good reason), they tend, as a people, to be misunderstood, looked down on and often maligned by people from other regions of the country. Sadly, in some ways they have fallen to meet those expectations.

But despite the struggles and disenfranchisement of his people, HILLBILLY ELEGY is a beautiful tribute to Vance's love for the grandmother who raised him, and the many members of his extended family, who had a hand in elevating him up, and out, of a cycle of desperate poverty and hopelessness. Very few people who grew up like him escaped their circumstances.

JD's kin (Hillbillies) are part of a cultural group made up of white, blue collar, largely uneducated, fiercely loyal, geographically connected, extended families. They inhabit the area of the country that extends south from the Ohio Rust belt to the hollers of Kentucky, Tennessee, and West Virginia. Collectively, this group has less hope, less opportunity and fewer prospects than any other culturally or racially defined group in America.

JD, who graduated from YALE Law School, wants the hardships suffered by his kin folk to be understand by outsiders and policy makers. He readily admits there are no easy solutions to the rampant social problems , that are holding them back in the "land of opportunity". Even though some of the stereo types ring true, you will gain a solid understanding of the challenges faced by these remarkable people, and an admiration for their dedication to family, and their strength, in the face of adversity.

Learn what it REALLY means to be a proud Hillbilly!

This was a well written book and an insightful look into life in Appalachia, a place that is rarely represented in literature, and never in a positive, balanced, or detailed way. J.D. Vance talks about his chaotic childhood and also discusses some of the problems that affect Appalachia. A lot of his conclusions make sense such as how the culture has to change and some of these conclusions can be applied to any struggling demographic whether they are poor white people in Appalachia or poor inner city blacks people. I would recommend this book to anyone looking for an interesting memoir on growing up in Appalachia. A must read!

I Just heard from a quite learned, educated person - "You would think that if someone could get education, get a better job, better food, better living conditions etc. that they could work themselves out of poverty..." I insisted they read this book!

😡 It's interesting to see that, though Vance is from southwest Ohio, he's given many people here the impression that he's from Kentucky or West Virginia (Appalachia). But southwest Ohio is indeed a region populated by hillbillies. Certainly more insight into the area may be had by reading "Knockemstiff," a book of short stories by a fine writer, Donald Ray Pollock, from the same area, where they had a serious pill problem before it became fashionable to talk about opioids.

I am troubled not so much by the content of the book, but by the way it has been interpreted and used.

As a memoir speaking to the devastating consequences of ACEs, as well as the importance of mentors and role models (even imperfect ones!) this book is excellent. Vance shows remarkable honesty and vulnerability in his writing and really gives readers a glimpse of a portion of America that is far too often overlooked, if not openly despised, by many of the same people who claim to care for the poor and oppressed.

BUT. As a book explaining the many factors contributing to support for Trump in poor rural communities, look elsewhere. Please.

This book is a memoir. It does not address the many historical, political, and economic factors that have contributed to poverty in this region.

Even more troubling, Vance appears to downplay the role of race as a social and economic force on more than one occasion, seemingly misunderstanding that its recognition does not downplay his own experiences or his suffering. He also comes to some weird conclusions- at one point stating flatly, “there is no government that can fix these problems for us. We created them, and only we can fix them.” This, when, in fact, a combined history of government policies and corporate interests are precisely the entities and forces attributed to poverty in Appalachia.

Indeed, Vance seems to effectively blame a culture for the crises afflicting Appalachia, rather than seeing a culture reacting to crisis. Any discerning reader should be wary of these conclusions.

I thoroughly enjoyed this book. I found Chapter 11 to be particularly useful in understanding the motivations of voters in the Rust Belt: “His wife (Obama) tells us that we shouldn’t be feeding our children certain foods, and we hate her for it - not because we think she’s wrong but because we know she’s right.”

A readable, interesting memoir told within a very particular sociological construct, with a very particular political agenda. More of a 2.0 rating for me, with rounding up because of the author's writing skills. But boy, some of his conclusions were maddening....

While this book is controversial especially from others who live in the Appalachian region I feel the main take away's are of a deeply personal nature and can transcend the sweeping commentary of the region.

J.D. Vance does a great job of showcasing how "escaping" the town and way you were brought up does not free you from the emotional scares that are left behind. We all must come to a point of growing and moving on from emotional trauma or fall victim to perpetuating those same crimes. The key is to never lose the idea/hope/belief that hard work and care will help see you through to a better future.

Fascinating look in to the Appalachian culture with its values, positives and negatives. It is a powerful blend of stories from his life and compelling thoughts on society. With knowledge of the foster care system, I appreciated his view of what helps kids in crisis ultimately succeed.

PiggyReads thinks this title is suitable for 15 years and over

bell5133 thinks this title is suitable for 13 years and over

bell5133 thinks this title is suitable for 10 years and over

LThomas_Library thinks this title is suitable for 17 years and over

runningbeat thinks this title is suitable for 16 years and over

“No person’s childhood gives him or her a perpetual moral get-out-of-jail-free card.” (334)

“whenever people ask me what I’d most like to change about the white working class, I say, “The feeling that our choices don’t matter.”
― J.D. Vance, Hillbilly Elegy: A Memoir of a Family and Culture in Crisis

In Hillbilly Elegy, J.D. Vance tells the true story of what a social, regional, and class decline feels like when you were born with it hanging around your neck. A deeply moving memoir, with its share of humor and vividly colorful figures, Hillbilly Elegy is the story of how upward mobility really feels. And it is an urgent and troubling meditation on the loss of the American dream for a large segment of this country.

Find it at VIRL